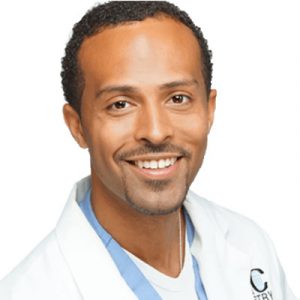 Dr. Damon D. Ross (“Dr. Ross”) was born and raised in Flint, Michigan. With hopes of warmer weather, Dr. Ross traveled south to attend Tennessee State University (TSU) in Nashville, TN. While attending TSU, Dr. Ross had the opportunity to play two years of college basketball. After being accepted to the University of North Carolina-School of Dentistry, Dr. Ross decided to leave college early. During dental school, Dr. Ross was very active in the Student National Dental Association and served as the 2005-2006 National President of this organization.

Dr. Ross’ dedication to helping others was acknowledged by Ebony Magazine, as he was featured in the February 2006 edition as one of the “Top 30 Under 30”. Upon graduation from dental school in 2006, Dr. Ross decided to further his education by attending the University of Texas-Health Science Center of San Antonio and completed the two-year specialized pediatric dental residency program. Dr. Ross is a member of the San Antonio Academy of Pediatric Dentistry, American Academy of Pediatric Dentistry, American Dental Association, and the National Dental Association.