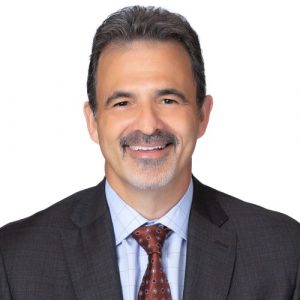 John A. Campagna, M.D., F.A.C.S was born and raised in western Pennsylvania and graduated summa cum laude and Phi Beta Kappa from the University of Pittsburgh in 1984. He obtained a bachelor of science degree in chemistry with departmental distinction. He received his medical degree from the University of Pittsburgh in 1988, graduating with highest honors and was inducted into the Alpha Omega Alpha honorary medical society. Dr. Campagna attended medical school at Pitt via the Health Professions Scholarship Program of the United States Army and completed his internship at Letterman Army Medical Center on the Presidio of San Francisco, California in 1989. His residency in ophthalmology was completed in 1992 at the University of South Florida in Tampa, where he served as chief resident throughout his senior year. Dr. Campagna completed his glaucoma fellowship at the University of Iowa in 1993. During his fellowship, Dr. Campagna was the recipient of the Heed Foundation Fellowship in postgraduate ophthalmology.

In 1993, he was assigned to Brooke Army Medical Center, Fort Sam Houston, Texas as the director of glaucoma services. He has received numerous military and civilian awards for his teaching, research and presentations. His research has been presented at local, national and international ophthalmic meetings including the American Academy of Ophthalmology and the Association for Research in Vision and Ophthalmology. He served as the first-year resident advisor for the combined residency programs at Wilford Hall Air Force Medical Center and Brooke Army Medical Center. Major Campagna completed his tour of duty and was honorably discharged on July 12, 1997. He was awarded the Meritorious Service Medal for his contributions to medical education and patient care while on active duty.

Dr. Campagna is Board Certified in Ophthalmology and participates in Maintenance of Certification and Recertification. He is a Fellow of the American College of Surgeons, the American Glaucoma Society, the American Academy of Ophthalmology and the American Society of Cataract and Refractive Surgery. He is an emeritus member of the American Eye Study Club. He served as a committee member of the Ophthalmic Mutual Insurance Company and serves as an Examiner and Exam Development Committee member for the American Board of Ophthalmology. He has served as President and Educational Program Director for the San Antonio Society of Ophthalmology. He was the Chief of Surgery for the Nix Medical Center and the Medical Director of the Alamo Heights Surgicare Ambulatory Surgery Center. He is a member of the Order of St. John, which operates the St. John Eye Hospital in Jerusalem. Dr. Campagna is a Global Health Volunteer for Unite for Sight. Most recently he has delivered eye care and surgery to west Africans in rural Ghana and at the Crystal Eye Hospital in Accra. He holds a faculty appointment as Clinical Associate Professor of Ophthalmology at UT Health San Antonio. Dr. Campagna is listed in the annual publication, “Best Doctors” and is also named in Texas Monthly’s “Texas Super Doctors.” Dr. Campagna specializes in the treatment of cataracts and glaucoma.  His current emphasis is on Premium Cataract and Intraocular Lens surgery as well as Micro-invasive Glaucoma surgery. He has performed more than 10,000 intraocular surgeries and lasers.

Dr. Campagna’s wife, Gretchen, is a chemical engineer who has worked for PPG Industries, Procter & Gamble, and DPT/Mylan. She is currently a consultant for GLG. They have two children, Giovanni and Gabriella, who attended Alamo Heights Schools and the University of Texas at Austin. Giovanni has an undergraduate degree in biomedical engineering, is a graduate of the Baylor College of Medicine, and completed a transitional internship/residency at the Dell School of Medicine in Austin. He is currently an ophthalmology resident at UCLA/Jules Stein Eye Institute. Gabriella has an undergraduate degree in architecture and received a Master of Fine Arts in Design and Management from Savannah College of Art and Design. She works for Google.