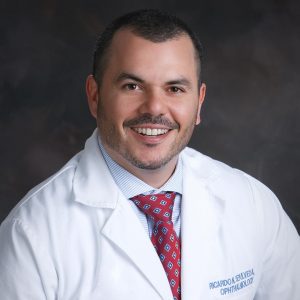 In 2004, Ricardo Sepulveda M.D. moved to Cleveland, OH for an internship in General Surgery at the world renowned Cleveland Clinic. He developed an interest in Eyelid and Facial Surgery after working with Dr. Maria Siemionow who performed the first face transplant in the US, and also completed a course in Microsurgery under her supervision.

After his internship he completed a 3 year Ophthalmology residency at New York Medical College St. Vincent’s Hospital in Manhattan and served as Chief Resident in his final year. During this year, Ricardo Sepulveda M.D. spent one month living in Madurai, India learning the Small Incision Cataract Surgery technique at Aravind Eye Hospital. He was then invited to return to the Cleveland Clinic for a fellowship in Refractive Surgery and Corneal Diseases at the Cole Eye Institute.

In 2009 he moved to Houston, TX to work with his friend and mentor Dr. Garcia, where he completed an additional two year surgical fellowship in Retinal and Vitreous Diseases of the eye.

Ricardo Sepulveda M.D. has been involved in Cornea, Diabetes and Macular Degeneration research projects throughout his career, has published in several journals of medicine and co-authored in Adler’s Textbook of Ophthalmology.

Ricardo Sepulveda M.D. has lived in San Antonio for six years with his wife and three daughters. He enjoys living closer to his family in Mexico and the amenities both the city and Texas Hill Country have to offer. He is a third generation doctor and understands the importance of cultivating long lasting doctor-patient relationships. Ricardo Sepulveda M.D. brings over fifteen years of clinical experience with over 10,000 eye procedures to CHES Eye Centers.